This is a non-conscious mechanism where we automatically mirror the attitudes and facial expressions of others. This mechanism appears from birth, and any normal person is able to resonate with others.
However, if the sight of someone suffering causes us to suffer too, we will not be able to help them: we will need help too.


In adults, resonance reflects the immaturity of identity. In order to maintain this identity during social interactions, regulation mechanisms are essential: this is the role of empathy which will allow the awareness of the other's suffering without being influenced by it.

Empathy will thus regulate the feeling of compassion that arises from resonance and leads a baby, from the age of seven months, to bring comfort to another crying child. In this case, reassuring the other child will allow the baby to soothe its own emotions.


A baby who hears another baby crying will also cry.
If he has the opportunity to calm him down during contact, he will calm himself down.
Both will feel better, this will be the first step towards altruism
which leads to helping the one who is suffering.

B – Empathy and the development of identity :

In empathy, one perceives the pain of the other, without suffering as he or she does; this mechanism, which takes four years to become functional in children, allows them not to be absorbed by the identity of the other and to keep their own. Indeed, empathy includes the ability to keep distance from others.
Here we see all the subtlety of the work of the frontal cortex, which must learn to distinguish itself from the other person, without however denying their suffering.
Empathy allows us to know ourselves and to recognise the other. Conversely, insensitivity is the denial of the other and of a part of oneself.

Thus, entering into the intimacy of the other teaches one to develop one's own identity.
On the contrary, attributing the feelings of the other person indicates that the maturation of one's own identity has not been completed. Only this maturation makes it possible to lean towards the other while escaping his influence.
That self-focused behaviour turns towards the other depends on the inhibitory action of the frontal cortex. This means that social self-control is being established. The child who reacts to the other's behaviour begins to control what he or she feels.

Empathy goes far beyond a simple mimetic automatism based on mirror neurons: the brain elaborates a complex work of representation of what the other feels.
Thus, if we take the example of pain perception, the existence of mirror neurons would be enough to allow us to feel the pain of others. But neuroscientist Nicolas Danziger of the Pitié-Salpêtrière Hospital has shown that people who are insensitive to pain are able to assess the degree of suffering of others from the expression on their face.
They are able to do this without experiencing any personal pain.
This would indicate that mirror neurons do not process pain: they only process visual information from others. The sensation of pain would be processed in another brain region and would respond not to a real injury, but to the memory of experienced suffering.

The existence of mirror neurons reflects the brain's ability to work economically. If one region is used to translate certain personal motor or sensory responses, why use another region to translate the motor or sensory responses of others. The same region is sufficient, and a simple command will suffice to determine whether it is the self or the other.
In the first case, a pain will lead to a response adapted to oneself (motor response of flight, attack or withdrawal); in the second case, what is perceived of the other will not require a personal response. However, it may activate an action circuit dedicated to helping others (compassion).

This evaluation mechanism is therefore based on experience. We can therefore understand the importance of wrestling games in animals, which thus experience the pain received or given. It is perhaps clumsy to prohibit 'violent' games for children, as they allow them to experience and remember the pain caused to others, since they feel it themselves. Conversely, scenes of violence can cause a certain detachment since children are only spectators.
Things change when we move from sight to imagination : imagining the other person in a painful situation leads to less activation in the brain than imagining oneself in the same painful situation.
While sensation plays an important role in the perception of one's own pain, imagination plays a major role when we project ourselves into past or future pain. Remembering past pain or being afraid of future pain causes even more pain.
The importance of this imaginary suffering will depend on the development of the subject's identity : if this has not had time to assert itself, the subject will "know" that he or she has no power over his or her life, which depends too much on others : faced with the future, he or she will feel powerless, as he or she has in the past... The feeling of anxiety will awaken pain, which will become more pronounced without any real suffering.

Were the very first modern humans capable of feeling compassion and showing altruism towards their fellow men ?
An international study, coordinated by anthropologists from the Prehistory to the Present Research Unit, suggests that early modern humans were, like us, capable of compassion and altruism towards their fellow human beings.
To do this, the researchers analysed the skull of a 12-13 year old adolescent, dating back almost 100 000 years. This adolescent showed traces of a healed fracture on the forehead. Examination of the inside of the skull revealed that the injury had damaged the brain areas involved in psychomotor skills and social communication, putting his survival at risk. 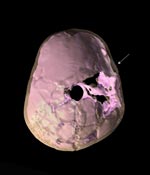 The healing of the wound shows that he was protected by his group until his death : in his grave, two antlers were found on his chest, revealing the respect the group had for this child.